We use cookies to ensure that we give you the best experience on our website. If you continue to use this site we will assume that you are happy with it.OkRefuse 3rd Party CookiesPrivacy Policy
Home Theatre

Jack the Ripper: The Women of Whitechapel

“Jack the Ripper: The Women of Whitechapel” brings a tragic tale from 19th-century life in East London reimagined on the musical stage.

The tale of notorious serial-killer, ‘Jack the Ripper’ has already been told and retold more times than I care to remember, however, in this opera by librettist Emma Jenkins and composer Iain Bell, Jack does not make an appearance and the focus is firmly on the five victims of Jack the Ripper, and the women and community living around them.

The central figure in this opera is one of the victims, Mary Kelly, who throughout is trying to prevent her daughter Magpie from being sold to a vice ring run by the doss house manager, Maud. The telling of this story is certainly not meant to be historically accurate, as it’s a work of fiction based on the very little-known facts about the Ripper’s victims. We can assume that a lot of women living in the doss house were prostitutes, but not all. The Maud character is clearly a work of fiction, because the doss house involved had no madam organising the prostitutes, and, the women were known to be independent. What the opera does well is outlining the struggles these women faced in East London in the 1880s, living in extreme poverty and faced with men who cared little about their circumstances. Often, the men are depicted as faceless soulless characters in top-hats preying on women for their own gratification. We’re shown how seemingly respectable people can treat women with barbarity for their own gratification.

Early in the second act, there’s a scene that attempts to bring some humour and lighten the audience’s mood. Here Susan Bullock as Liz has a drunken scene with a local constable and sings a very funny song, “God, I love a fireman” while wearing a fireman’s hat. These odd moments of humour seem a little out-of-step with the rest of the opera but bring a welcome laugh to a grim mood brought on by the murders.

The singing is top-notch, and conductor Martyn Brabbins’ orchestra does an impressive job. For me, this opera really took off in Act 2, as you got to hear more the fantastic ENO Chorus. In fact, the entire company plays part in a grand choral ensemble with an English version of the Requiem Mass that builds to an emotive climax. Individually, the main characters singing is passionate and powerful. Notable are Natalya Romaniw, playing Mary Kelly; Janis Kelly and Marie McLaughlin as Polly and Annie who both bring seasoned ENO experience to their parts.

I highly recommend seeing this show if you are a fan of opera, musical theatre or historical drama.

Our theatre reviews are written by our site owner, Robert Cope, with the odd guest review from time-to-time. Robert is passionate about all forms of theatre and bringing you the latest shows worth taking a look at.

Other posts by Robert Cope

The Stars That Play with Laughing Sam’s Dice

Posted by Robert Cope / 1206 / 0
Gripping, Tense, Drama 5 Summary I highly recommend seeing ‘The Stars That Play with Laughing Sam’s Dice’ to everyone, especially music fans and fans of...
27 Mar

It Happened in Key West

Agatha Christie’s Murder On The Nile 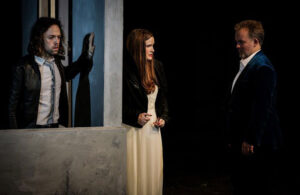